Home/Uncategorized/St George and the Dragon
Previous Next

When All is Gone,St George and the Dragon Will Stand.

St. George travel for many months by land and sea until he came to Libya. Here he met a poor hermit who told him that everyone in that land was in great distress, for a dragon had long ravaged the country.

The old man said, ‘he demands the sacrifice of a beautiful maiden and now all the young girls have been killed. The king’s daughter alone remains, and unless we can find a knight who can slay the dragon she will be sacrificed tomorrow. The king of Egypt will give his daughter in marriage to the champion who overcomes this terrible monster.’

When St. George heard this story, he was determined to try and save the princess, so he rested that night in the hermit’s hut, and at daybreak set out to the valley where the dragon lived. When he drew near he saw a little procession of women, head with  a beautiful girl dressed in pure Arabian silk. The princess Sabra was being led by her attendants to the place of death. The knight spurred his horse and overtook the ladies. He comforted them with brave words and persuaded the princess to return to the palace. Then he entered the valley.

As soon as the dragon saw him it rushed from its cave, roaring with a sound louder than thunder. Its head was immense and its tail fifty feet long. But St. George was not afraid. He struck the monster with his spear, hoping he would wound it. 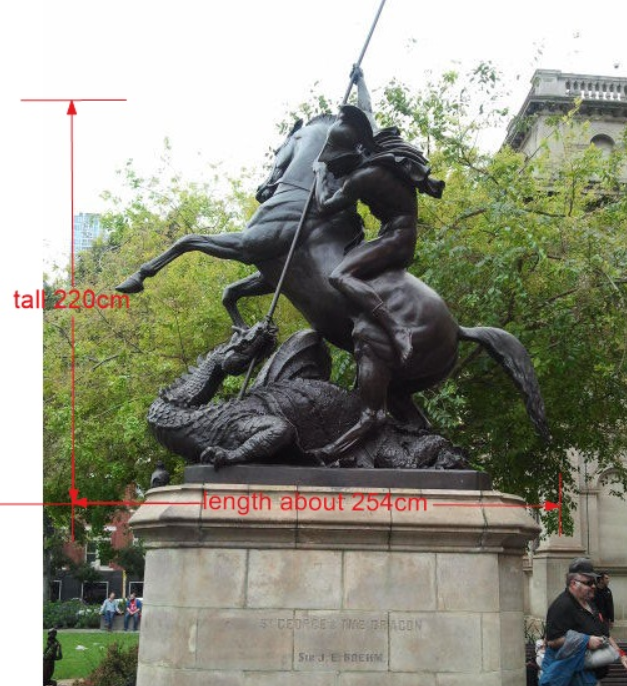 He smote the beast with his sword, but the dragon poured poison on him and  split in two. Once more he refreshed himself from the orange tree and then, with his sword in his hand, he rushed at the dragon and pierced it under the wing where there were no scales, so that it fell dead at his feet.

In conclusion ,the story is legend. The story is so beautiful. But,how we can make a story as a sculpture. We can remember and enjoy art forever? Tell me your story. We can make a art sculpture depends on your ideas…